Text modes will be included in the North America broadcast of The Mighty KBC, Sunday March 17 at 0000 to 0000 UTC, on 7375 kHz via Nauen, Germany. At about 0130 UTC, PSKR250 will be centered on 1000 Hz and MFSK63 on 2000 Hz (same as on March 10 except the audio frequencies are reversed). At just before 0200 UTC, MT63-1000 (long interleave) formatted for Flmsg will be centered on 1000 Hz. An image in MFSK32 will be centered on 2500 Hz. In addition to KBC digital text from Europe to North America, the Voice of America will broadcast digital text from North America to Europe, starting this weekend. For information about Kim Andrew Elliott's "VOA Radiogram" program, see http://voaradiogram.net/post/45287954494/soft-launch-of-voa-radiogram-this-weekend
Lähettänyt Rick klo 18:14 No comments: 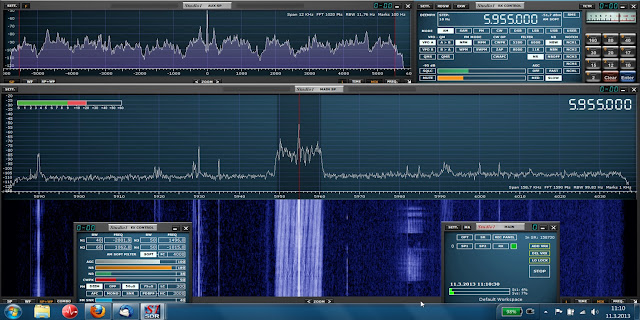 Monday morning 09.00 -11.00 UTC The Mighty KBC is testing on 5955 kHz from Nauen with The Giant Jukebox. We are also on the air at the same time on 6095 kHz with Transport Radio from Wertachtal. Please mail us your reports for both frequencies.

On Tuesday we are testing again with Transport Radio on both frequencies
Please spread the word.
Mail your reports to themightykbc @ gmail.com and / or to info @ transportradio.nl
Lähettänyt Rick klo 10:39 No comments: